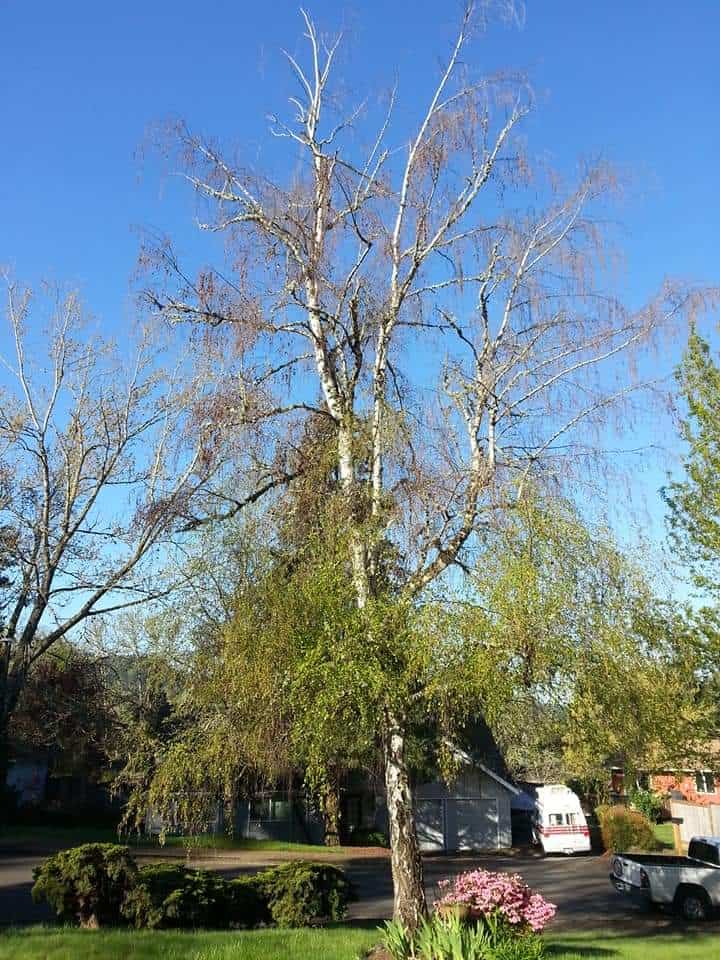 If you pay attention to the trees growing around you, it has become almost impossible for the last four or five years to avoid seeing Birches in trouble and displaying changes of color in the foliage and entire branches dying in the middle of summer. Chances are, the trees are being attacked by an insect from the Beetle order (Coleoptera) and from the Buprestidae family called the Bronze Birch Borer (Agrilus anxius.). This insect, native to North America started to appear or re-appear (some say it was in the area before) in Eugene and Springfield about 13 years ago, eventually migrating from Corvallis and Portland where it was well established before.

After the adult females have laid their eggs in summer, under crevasses or after chewing off tiny depressions in the bark, some small larvae will emerge and feed on the phloem of the tree, right under the bark, creating “S” shaped or zig-zag galleries. The larva can reach up to ½ inch in length but is surprisingly slender and has a large flat head. The aggressive feeding will lead to the girdling of entire branches and the death of the tree after a few seasons, depending on the health of the tree and its size. By looking closely to the declining branches, one can often detect red sap oozing from tiny holes of tiny crack but the ultimate signature of the pest is the presence of “D” shape exit holes about 1/8” wide.

After wintering over inside the tree, the pupa changes into an adult insect in the spring and will emerge from the exit hole to continue the cycle. The mature insect is about 1/2 inch long with a narrow bronze body color and sometimes seen on the bark. It is important however to know that decline in the canopy can also be the result of bark being chewed by Squirrels or heavy pecking of the bark by Red-Breasted Sapsuckers.

The pest creates significant damage almost always leading to mortality on most of the Birches present in the Willamette Valley and we have lost about 80% of the existing Birch population in Eugene/Springfield alone. The most vulnerable Birch species we have in our area are the European White Birch, sometimes called Silver Birch (Betula pendula) and the Himalayan Birch ‘Jacqmontii’ (Betula utilis ‘Jacqmontii’). The latter is very popular and was broadly planted in the 90s for its striking white bark and fast growth. The former has a tendency of being pretty invasive and emerge in locations where it was not previously expected but was also planted very extensively in earlier years eventually passing the torch of celebrity to its Himalayan cousin.

The main reason these two trees are so vulnerable is the fact that they are not indigenous to the US therefore never had an adaptation and an evolution to resist the pest.  In the American native species, the other two most common species of Birches seen in the Valley are the Paper Birch (Betula papyrifera) and the River Birch (Betula nigra) however, they are not seen outside landscapes because the Willamette Valley has no native Birch growing in the wild. The River Birch is the only Birch with a strong resistance to the Bronze Birch Borer and seems to be the only one left standing as all the others succumb to the pest.

So, what happens to the expected resistance of the indigenous trees to the pest in our area? Oregon has two native Birches: the Paper Birch mentioned above and the Water Birch (Betula occidentalis), a small tree with multi trunks and a dark brownish bark seen in the Cascades and eastern Oregon.

The Paper Birch, also called Canoe Birch sometimes is seen only in the NE of the State in the region called the Walla-Wallas. Historically, the Fur Trade of the 18th and 19th Centuries conducted in the northern States relied heavily on canoes to travel and transport the furs to trading posts. As the trappers arrived in Oregon, the Paper Birch, so precious for the confection of canoes started to become much less common as the Trade migrated in the south and southwest of Oregon and they had to switch to mules and horses to carry the loads.

The genus Betula encompassing all the Birches is the perfect example of trees made for the northern latitudes where the climate is too cold for the Bronze Birch Borer and attacks are rare. The nursery trade however has adopted Birches early on because of their beauty but also because of their easy way to propagate and grow. With a heavy demand from the public, the supply became plentiful and Birches were sold just about anywhere in the US.

Despite wet winters and springs, the western part of Oregon is a very dry place in summer, receiving – between July and October – less precipitation than Phoenix, AZ! Arizona has monsoons and frequent rain storms during those months while we usually roast! Naturally, imported tree species, especially those from the northern latitudes like Birches will have a harder time to adapt and show signs of stress in drought conditions! The stress makes them highly susceptible to pests and diseases therefore making them a perfect target to the Bronze Birch Borer.

As our climate is changing, we need to realize that our adored Birches might not be the best choice for our area. Even with adequate irrigation, they will struggle and eventually fall victims to the Bronze Birch Borer, even the indigenous species like Paper and Water Birches will be in trouble; small consolation, only the River Birch seems to resist… so far. The question arises inevitably regarding other means of dealing with the pest. Can we treat the trees to help them stay alive? The answer to this is not an easy one. Although injections of insecticide have been known to help (if done preventively), the results are not guaranteed and some trees will be attacked despite the treatment.

Like everything in Nature, we have exceptions and some trees will show a natural way to resist the pest and possibly become immune to it, or suffer small attacks and not necessarily die.  I am hoping for that; I actually have seen a few untreated trees still doing just fine while others a few blocks away are dropping like flies. I think however that in this day and age, every tree is very important and we need to prioritize resilience over esthetics when planting new trees. There are plenty of other striking tree species to replace the Birches we love and if we miss them so much, maybe a trip up north is preferable to forcing destiny?

We offer a full range of services at competitive rates because we care about your property. (541)461-1737

SIGN UP TO RECEIVE OUR QUARTERLY NEWSLETTER FOR HELPFUL PRO TIPS, DISCOUNTS & MORE:

Get a free estimate

"These guys are what you want. Professional, courteous and diligent. They efficiently removed a 12 story tall dead Spruce that was inches from my home. Their cleanup was excellent. I got several bids, and theirs was the best."
- DES MAIL